As a rule, I do not review non-medical books on this blog, unless it forms part of a Top Ten Tuesday. However, since my recent discovery of the myriad of book blogs, Goodreads and the ability to read while maintaining my schedule has led to me rather bravely attempting a bookish challenge, I have decided to blog about those books (kind of as proof I suppose).

For the category of Crime and Mystery I read The Girl with the Dragon Tattoo by Stieg Larsson. 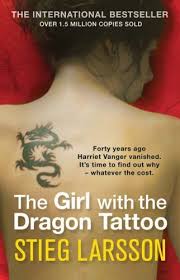 GoodReads summary: Mikael Blomkvist, a once-respected financial journalist, watches his professional life rapidly crumble around him. Prospects appear bleak until an unexpected (and unsettling) offer to resurrect his name is extended by an old-school titan of Swedish industry. The catch–and there’s always a catch–is that Blomkvist must first spend a year researching a mysterious disappearance that has remained unsolved for nearly four decades. With few other options, he accepts and enlists the help of investigator Lisbeth Salander, a misunderstood genius with a cache of authority issues. Little is as it seems in Larsson’s novel, but there is at least one constant: you really don’t want to mess with the girl with the dragon tattoo.

Larsson is obviously a good writer with a penchant for the descriptive. Too such an extent, unfortunately, that the book becomes painfully slow. His characterisation is excellent, but he attempts to characterise even the flat, less-important characters, which again adds to the slowness of the novel.

Does The Girl with the Dragon Tattoo have an excellent storyline with unexpected twists? Yes. But it takes Larsson more than half of the novel to reach the thrill its genre claims, and then the thrills are short and poorly sustained.

I am compelled to wonder if this may be resultant of one of two things: either

I watched the Swedish film in 2011 and perhaps I would have enjoyed the book more if this was not the case. The film certainly streamlines the book.

The Swedish title is said to be “Men Who Hate Women” and with themes such as libel, corruption, bureaucracy and gender discrimination, one has to wonder if Larsson was not perhaps attempting to expose undesirable characteristics of his country under the veil of a thriller.

Speaking of which, the themes of this novel are at times vague and poorly defined, which makes it a pity that the author is no longer around to explain or defend.

A warning to sensitive readers: there are extremely graphic scenes of violence and sexual assault. I do not think this makes a negative contribution to the novel, but if you pick it up, be prepared.