Today is World AIDS Day. If you have been following this blog, you will know that HIV/AIDS forms a very big part of my daily work, and that I am passionate about finding solutions to this multifaceted problem (because it’s about more than just a cure). You can click here to see my previous posts about HIV&AIDS.

I’ll admit that this year has threatened to reduce my optimism and my drive for this end-goal. It is difficult to believe that we could possible do anything about this pandemic in a country where people continue to be non-compliant, where so many patients would rather drink strange concoctions from a traditional healer than to take their ARVs.

And it is difficult to imagine that we can stem HIV-infections when we continue to fail at stemming malnutrition and poverty and violence and “normal” discrimination.

But I think about the thirteen year old I saw who was dying of full-blown AIDS, and the ten-year-old whose body was wracked with disseminated TB and Kaposi’s Sarcoma and pretty much a petri dish for a bunch of rare microbes. And I think about the compliant patients who have had miraculous recoveries, and the healthy babies born to HIV-positive mothers, and I know: we have to keep going. We have to keep trying.

In a way, today reminds me of a kind of loss of innocence. When you decide you want to “help people” and work in healthcare, you know there will be HIV in your patients, but you never realise quite how big a part of your work it will be. You don’t realise that putting on gloves might take priority over compressing an open wound one day. People will tell you that needlepricks will be a daily concern, but you don’t realise that you will have nightmares about it. 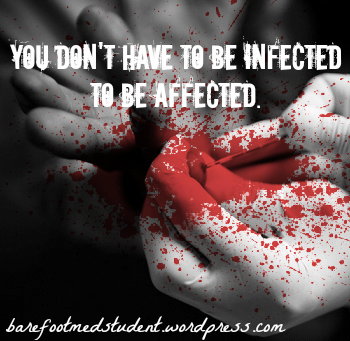 I want no new infections. I want people’s infections to be well-controlled. I want more medicines, cheaper medicines. I want to be able to treat my patients without the constant fear of a needleprick giving me an incurable disease. I want fewer AIDS-orphans. And perhaps I’ll be so optimistic as to hope for a cure.