In my Semester at Sea reflections, I return often to Vietnam. I think it was the first country to shock me, well and truly. It was not very easy to make my SAS experience medically-oriented, and I had to do a lot of hard work to learn about medicine in various countries. Vietnam was the country where the medicine came to me without having to be asked (much like the vendors, and the traffic).

We had a field lab for my Illness Narratives class (definitely one of the best classes OF MY LIFE, but more of that later). We visited an orphanage for disabled children and an elderly women’s home.

It looked like a happy orphanage, if there is such a thing. Colourful playgrounds. Kids running up to greet us, hug us, hold our hands. The children we saw initially were mostly children with Trisomy 21 – a little hypotonic, but otherwise probably reasonably healthy.

Then we were taken to two wards that were not healthy. 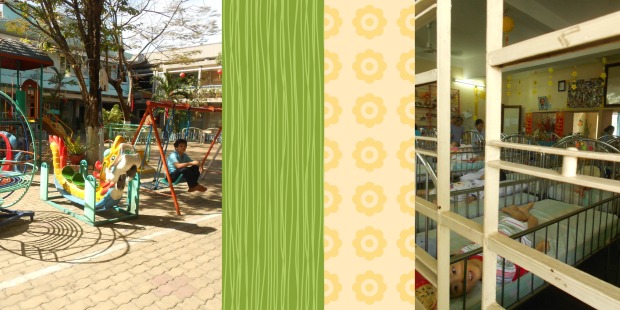 Ward 1: So many grown children in diapers, with the worst flexor contractures I have ever seen (I haven’t seen that many, but still). From what I could tell most of them had Cerebral Palsy or Hypoxic Ischaemic Encephalopathy. The nurses said the children got daily physiotherapy, but if they did… it wasn’t working.

Young boys with stubble on their chins. Young girls with adolescent skin. And a good deal of them were, I believe, not mentally delayed. A good deal of them could have been taught to take care of themselves to some extent, if only someone tried. But it seemed as though all children with similar problems had been grouped into this one umbrella-area.

Ward 2: Just when you think you have seen the worst, you see worse. The hydrocephalus-ward. I would post pictures, but ethically I’m going to refrain. Basically, the largest hydrocephali I have ever seen (and I have seen a lot of those). My hands itched for a tape-measure. I tested their reflexes, and many of the children had none.

I was told that the children had no hope for surgery. Essentially, they were waiting on death.

This was the first time that I realised how fortunate South Africa is. I always thought we were in such a bad place, but no child in South Africa need die from hydrocephalus (if they do, it is a fault in the system and not in availability). In Vietnam, the concept of free healthcare for the poor and desolate does not exist.

So I walked away from the orphanage thinking that maybe I (or someone else, or a team) could organise pro-bono surgery for these children. But I realised that even if we could pull it off – find the surgeons, the aneasthetists, scrub nurses, equipment, operating rooms and who knows what else for “free” – we would not really be solving the problem.

Because the real problem in Vietnam (and many other countries) is not JUST the fact that they have lots of disabled children. The problem is about maternal health care, early childhood care, social welfare, attitudes…

As I walked further away from the orphanage, I felt desolate myself. Here was a problem that I really did not think had a solution.

But as I walked even further, something happened that turned the shock and anguish and uselessness into a fire, and I got angry. Angry that the world allows situations like these to exist. Angry that we think if people in OUR countries are okay, we can stop worrying. In the global society, does not EVERY life affect another? It is juvenile, I know, to expect countries to care about each other’s healthcare or educational problems. What are the odds of situations in Vietnam truly affecting me? I do not know, but that’s not really why I care. I care, and I am angry, because I cannot NOT be affected by what I saw that day.

I still do not have a solution, exactly.

But I do have a fire.

Despite the sadness of this day, Vietnam was a wonderful country. This clip features my voice and reflections, but also the reflections of my fellow SASers. Enjoy.