I saw these two secrets on PostSecret that tugged at my heartstrings (metaphorically). 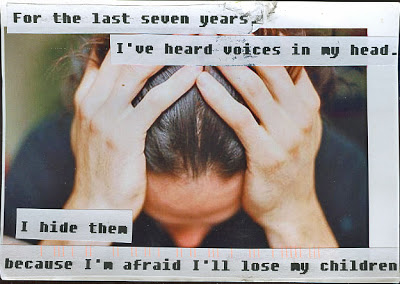 For the last seven years I’ve heard voices in my head. I hide them because I’m afraid I’ll lose my children.

This one has me wondering if the author of this secret knows that it is not only Schizophrenia that presents with hallucinations – Major Depressive Disorder can cause hallucinations too. Most laypeople won’t know that. An ENT consultant once told us of a lady who was convinced that she was hallucinating, because she heard “sea gulls screeching in her head”. Turned out that she had a cerebral arteriovenous malformation with a bruit.

So stigma is to blame for this parent not seeking the help needed. I can’t imagine that taking someone’s children away is a viable reaction to mental illness – surely we don’t have the resources, and it completely disregards the truth that most mental illnesses can be completely controlled with the right treatment regimens. But I’m sure it happens. 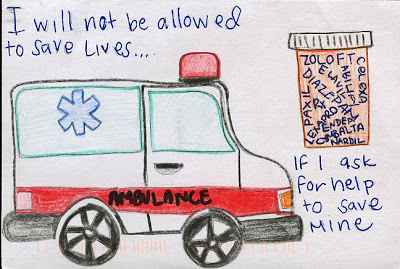 I will not be allowed to save lives…. If I ask for help to save mine.

It is a common belief among medical students that if they take any psychiatric medication and the medical board discovers it, they will not be allowed to practise. This leads to many students going to great lengths to pretend that they are okay and not seek help. In fact, this assumption is not true – at least not in South Africa. It may be so in other countries. I am sure that medications that cause drowsiness could cause specific concerns too.

It just breaks me that we tell patients, “This is not a death sentence! You can still lead a happy, productive life if you adhere to your treatment regimen!” yet among these same professionals having a mental illness is taboo.

I used to think that HIV stigma was bad, until I started my Psychiatry rotation. Addressing the stigma is so much more than the work of public health officials or NGOs. For one, healthcare professionals worldwide need to step up to the plate and do something concrete about the situation.

Postscript: I wonder if we subconsciously don’t do anything about the stigma because we would not have the resources to treat people if EVERYONE with a mental illness presented to hospital? This article published today estimates that only a quarter of South Africans requiring psychiatric treatment are actually getting it. Mental Health rarely features as a priority in the national healthcare budget…