Linking up with Christine from Bookishly Boisterous for this post. In her words, It allows book bloggers (or any blogger, for that matter) to write about pretty much anything, bookish or otherwise. 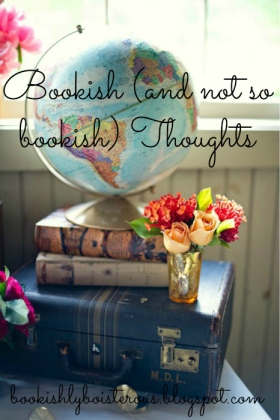 1. I AM ON HOLIDAAAAAAY! (Yes, that warranted all-Caps.) I now get to read lots of books. And write for NaNoWriMo (maybe…) and eat Mom’s cooking and all sorts of things.

2. The Boy bought me a book (BOUGHT ME A BOOK) to make up for something. I think he’s finally catching on – it’s been almost four years and this is the first book he got me. We Need New Names by NoViolet Bulawayo. I am SO excited to read this one.

3. I feel like one should not be allowed to work at a bookshop without actually being a little bookish. Shouldn’t there be an admissions test and a CPD program? At a bookshop today, the sales clerk had never heard of the book in #2. Okay, fair, maybe you can’t know all books. But when I said, “It was shortlisted for the Booker Prize this year” she looked genuinely confused and asked me, “The what-prize?”

4. I re-read The Little Prince this past weekend. The last time I read it, I was eight years old. There is a LOT more to it than I remember. I feel like I need to have a discussion about this. 5. This past weekend I had dinner with some Semester at Sea people – one lady I met on my voyage (she orchestrated the meeting, is now on her seventh SAS voyage, and is an awesome blogger and reader), one professor who taught me on said voyage, and two young women who did the Fall 2010 voyage and are now living in Cape Town. It was wonderful. I love the connections I make through SAS.

6. This weekend I watched a special on Animal Planet about Mermaids. Allegedly, Mermaids are REAL. I still wonder if it wasn’t a spoof, but there were so many scientists interviewed. Even some South African archaeologists and marine biologists. I am still confused. It took most of my childhood to come to terms with mermaids not being real.

7. I just learned about World Book Night. I wish we had something like that in South Africa. I want to give books. I also want to be reasonably sure that people would read them.

8. The Boy and I climbed Lion’s Head. It was awesome. And a lot more exhausting than I remember it being five years ago.

9. I am sad that Halloween isn’t more of an event in South Africa. I want to carve a pumpkin. And decorate. And dress up. And give kiddies candy. And go to an awesome Halloween party. I am not sure that Halloween in SA would even work. But I so wish it could.

10. What is this called – the printing on the side of the book? Anyways, I think it is awesome. I almost bought the book (Ketchup Clouds) just for that. The blurb sounded good too. But NoViolet was waiting for me. 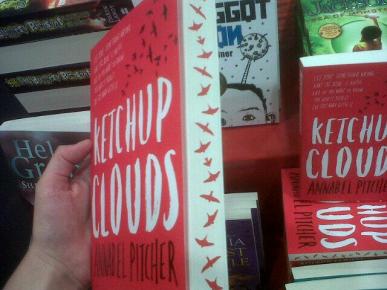