I’m linking up with Jamie from The Perpetual Page Turner for her awesome end-of-year bookish survey. This was hard because I don’t really take note of all these things while reading! But it was also good fun. What would my life be without books? Pretty empty. (The logos I’m using are from Jamie’s original post.)

YA – Eleanor & Park by Rainbow Rowell

Historical – In The Shadow of the Banyan by Vaddey Ratner

Paranormal – The Golem and the Jinni by Helene Wecker

2. Book You Were Excited About & Thought You Were Going To Love More But Didn’t?

Clockwork Angel by Cassandra Clare – I wasn’t going to read beyond City of Glass because I felt she was just milking it, but I really thought The Infernal Devices could be fun. But the dialogue was too disconcordant with the era and I couldn’t continue beyond Clockwork Prince. I did love the attention Magnus Bane got though.

If You Find Me by Emily Murdoch – I thought the book’s premise sounded good, but the execution was just stunning and really surprised me.

I recommend a LOT of books, always hoping someone will like something I recommended. But the book I recommended to the greatest diversity of people was Every Day by David Levithan. I just found it to be relevant to so many people because of A’s… what? Fluidity? Something like that. I even read it to The Boy and he loved it.

It’s technically a duology, but The Program by Suzanne Young. This book was not at all the treacle I expected and I look forward to reading the sequel (by look forward I actually mean that I’m biting my nails to the quick).

Rainbow Rowell – I have only read Eleanor & Park, but I am so looking forward to reading her other books!

7. Best book that was out of your comfort zone or was a new genre for you?

The Old Man and the Sea by Ernest Hemingway – classics are just hard for me, I guess. This one was short so it was worth the risk. And it was fun reading it while sailing around the world!

The Scorpio Races by Maggie Stiefvater – a lot of people disliked this book because of the difficulty to distinguish between the two voices, but apart from that this book really had me on my nerves. I was also reading this while sailing, and I found myself  looking under my bed for water horses before going to sleep.

The Radiation Sonnets by Jane Yolen. I rarely re-read books unless they are either short or the type to read little bits of, like PostSecret books of coffee table books. A book of sonnets means I can read some of my favourite sonnets again. And these sonnets really are beautiful. 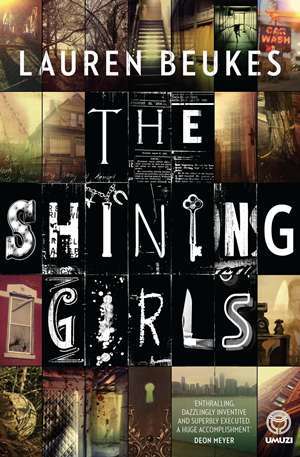 The Shining Girls by Lauren Beukes (South African edition) – she always has these awesome covers. I love this mish-mash, don’t you? I love how little elements of the story are hidden in the cover.

Alaska from Looking for Alaska by John Green. I loved that girl, you guys.

The Spirit Catches You and You Fall Down by Anne Fadiman – I read this for Illness Narratives and even though I’ll probably never deal with Hmong refugees in my professional life, it taught me so much about the cultural divide between doctors and their patients. Definitely such a formative book!

The Book Thief by Markus Zusak – do you know that I have had this book from the library several times? In fact, I was the first person to check it out when my library acquired it. Since then I’ve checked it out so many times but every time I struggle to get into it. But this year it just WORKED.

This from We Need New Names by NoViolet Bulawayo.

When things fall apart, the children of the land scurry and scatter like birds escaping a burning sky.”

Shortest: Master Harold… and the Boys, a play by Athold Fugard, at 64 pages

17. Book That Had A Scene In It That Had You Reeling And Dying To Talk To Somebody About It?

I’m pretty private in my reading and rarely really freak out with someone over a scene in a book. But THAT scene in Code Name Verity by Elizabeth Wein really had me reeling. (By that scene I kind of mean all of them.)

18. Favorite Relationship From A Book You Read In 2013 (be it romantic, friendship, etc).

Eleanor and Park from Eleanor & Park by Rainbow Rowell. Absolutely. That was the kind of relationship I wanted as a teen, I just didn’t know it.

19. Favorite Book You Read in 2013 From An Author You’ve Read Previously

The Shining Girls by Lauren Beukes. I also read Moxyland by her this year and she might actually be one of my favourite authors now.

20. Best Book You Read In 2013 That You Read Based SOLELY On A Recommendation From Somebody Else:

Railsea by China Mieville. Saw this being read by GirlXOXO and I have never read Moby Dick so I really had no idea what to expect. The description on the jackets is also quite bizarre. But it turned out being wonderful.

I’m going to be stubborn and say “historical” without splitting it into fiction and memoirs. Because I can, and because this year I specifically went out of my way to read books, whether fictional or not, about the history of different countries and events.

Ziri from Days of Blood and Starlight by Laini Taylor – I can fictionally crush on a chimera, right?

The Golem and the Jinni by Helene Wecker

Akata Witch by Nnedi Okorafor – I loved the magical realism on the background of Nigeria, a country I’ve never been to.

Daddy-Long-Legs by Jean Webster because it was so sweet and innocent and funny. (And free on iTunes)

Easy by Tammara Webber – I was reading this on the ship in transit between Yokohama and Kobe. I was really REALLY missing The Boy and so far some reason it just made me cry so much.

The Radiation Sonnets by Jane Yolen also made me cry a lot. And, of course, Looking for Alaska.

27. Book You Read in 2013 That You Think Got Overlooked This Year Or When It Came Out?

Sister-Sister by Rachel Zadok – I really feel that more should have been done to market this great South African novel nationally and internationally this year.

Boxes of Paper – Cate is a bookseller, and I love her reviews. We have pretty similar tastes in books, so that helps too.

The Devil Wears Scrubs by Freida McFadden – I had fun reading the book and then had great fun writing the review too.

3. Best discussion you had on your blog?

I’ll stick to bookish ones, although none of these really had a lot of interaction per se:

My Life in YA Titles

4. Most thought-provoking review or discussion you read on somebody else’s blog?

Seriously guys, I don’t remember these things very well… and even if I could there would be too many awesome discussions to choose from. I get my best bookish discussions at the blogs below. They have their own interesting discussions, but they also regularly share links to other awesome discussions around the blogosphere, which I appreciate.

The most bookish thing I attended was Exclusive Books’ warehouse sale: R50 per kilogram of books, and later further reduced to R25. It was pretty awesome. We need more bookish events, South Africa!

Moments, really: seeking out bookshops in every country I visited!

7. Most Popular Post This Year On Your Blog (whether it be by comments or views)?

Non-bookish: How To Tell You Work At A South African Public Hospital (this one got freshly pressed, I was very grateful)

Reviews, pretty much, but I do understand that they’re not always really fun to read unless you’re actually contemplating a specific book.

10.  Did you complete any reading challenges or goals that you had set for yourself at the beginning of this year?

The only goal I really set was to read 50 books – I read 77. Pretty happy about that. What with final year being next year I don’t think I’ll be able to do that again soon.

Probably either Long Walk to Freedom or Conversations with Myself by Nelson Mandela. It’s pretty embarrassing that I’ve never read these in their entirety, but I’ve read several excerpts from both and many other books about the Struggle so it’s not like I’ve been ignorant…

Dreams of Gods and Monsters by Laini Taylor

Six Feet Over It by Jennifer Longo – this one sounds like it could be both funny and deep (see what I did there).

4. Series Ending You Are Most Anticipating in 2014?

I’m not really reading many series any more so… Daughter of Smoke and Bone?

5. One Thing You Hope To Accomplish Or Do In Your Reading/Blogging In 2014?

Reading-wise I just want to keep reading where possible. Final Year is going to be super tough and I want to be okay with not being able to read some days, given that becoming a good doctor is pretty important right now.