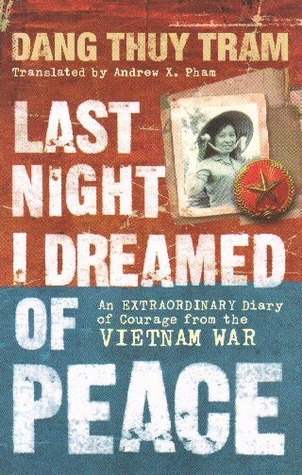 I bought this book while in Vietnam with Semester at Sea. Last Night I Dreamed of Peace by Đặng Thùy Trâm is the wartime diary of a young Vietnamese doctor during the Vietnam War (or the American War for them)  – 25, barely graduated, a female doctor in the 1960s.

Thuy was an incredible young woman. She grew up in Northern Vietnam, but was posted in the South at a civilian clinic for the war effort. She had to do many things she was not comfortable with, and soon took the role of a “war surgeon”. In addition she was responsible for training young nurses. I was hooked by the first line:

“Operated on one case of appendicitis with inadequate anaesthesia.”

She was basically doing “bush medicine” with far fewer resources than the most rural South African clinic. She worked while bombs were falling.

She was also barely more than a young girl. Her emotions often got the better of her. She got incredibly attached to her patients and then worried for her professional image. She was passionate about the Communist Party but also worried about hypocrisy within the party. Sometimes her incessant worries about these things got annoying. And her incessant worry about the man she loves but can no longer see; about whether she is “communist enough.”

But this is a diary, and one that was probably never intended for publication. She was not writing for an audience, but for herself. Additionally, it is a work of translation. So I think that criticising the writing style would certainly be missing the point.

Perhaps a little disconcertingly, Thuy wanted revenge. Anne Frank was a sweet girl who would not wish harm upon anyone. Thuy hated the foreign troops and wanted revenge for the people that had been lost. She praised the young boys, aged fourteen and sixteen, who fought and killed for their country. This was probably the part that bothered me most about the book. I guess I want her to be more like Anne Frank. But if I had seen what Truy saw, I would probably feel the same.

We don’t study too much of the Vietnam War in South African schools. This book helped me understand the war better than ever before. I definitely recommend this to travelers, healthcare workers and history buffs.