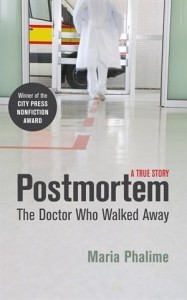 A South African child, born in Soweto, grows through her hardships and losses, excels at school, and decides that to pursue a medical career. She endures great challenges to reach her goal, but after four years as a qualified doctor, she hangs up her stethoscope and leaves the medical profession for good.

What causes our brightest, most passionate minds to leave behind a dream they would have died for? Postmortem: The Doctors Who Walked Away is, at its core, an autopsy not only of Maria Phalime’s career, but of the many South African doctors who have left.

But first and foremost, it is a memoir. Phalime does not presume to speak for others like her. She shares her story: her childhood, her pain, her medical career. And then she tries to tease apart the fibers of her undoing.

As a memoir, Postmortem reads well. I am a fan of memoirs, but find that they are sometimes too drawn out and too detailed, becoming more of a glorified journal. Not the case here, and at 208 pages I read this nearly in a single sitting.

Phalime starts off introspective, blaming none but herself. She seeks simply to understand what went wrong. In doing so she interviews other “doctors who walked away” as well as some who managed NOT to walk away.

She touches on the fact that med school admissions may be missing the mark entirely, and that the inherent tendency to admit overachieving Type A-personalities (I am one of those, too) may be its very downfall. She also discusses the potential that 18-year-olds opting to study medicine may not have an accurate idea of what they are REALLY getting themselves into.

Ultimately, Phalime does face the reality that as much as personal factors influenced her leaving, so too did external factors. She then addresses the failings of the South African system in such an open-minded way that I wish all politicians, policy makers and healthcare professionals would read it.

If I was worried that it would be a bitter narrative, I need not have been. At no point does Phalime blame those who stay behind. In fact, she offers very good points of view that can improve the situation of our South African doctors.

Parts of this book made me weep. Parts made me interminably sad. And parts gave me hope. I think it takes a gifted author to put those together.

This is a topic fraught with emotions, so I will keep my discussion for another day. But I must say that in my journey my viewpoints have changed much. As a layperson I frowned upon doctors who left, deeming them selfish. As a junior student, I wondered how anyone could ever wish to leave our great profession. Now, as a near-graduate, I have more empathy and understanding for the doctors who leave, as I have seen myself and my colleagues struggling with the same issues.

Perhaps in a sense, this memoir does not feel “finished” – but perhaps it should not be. The conversation needs to be carried forward, beyond the pages of the book.

Postmortem is a seminal work for this decade, and it would do our country well if our role-players heeded its message.

I received a copy of this book from the Author and her publishers (Tafelberg) in exchange for an honest review. Her website can be found here. An excerpt of her memoir can be read here.