My school doesn’t allow students to be on duty for more than 24 hours at a time. The few times that a doctor has expected me to stay beyond 24 hours, I have always pointed out the rule and if they disregarded it, reported it. Because, seriously.

But for some reason, we have one week in Internal Medicine with Cardiology, where we are expected to work 36-hour shifts and somehow, despite many students having complained about it, it is allowed. This time I didn’t go on a “crusade” about it, because honestly I am just so tired of constantly being on a crusade. 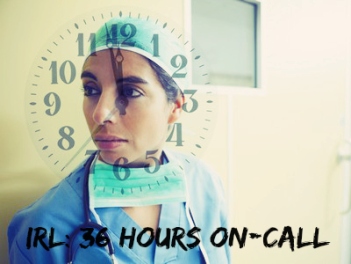 Technically, it’s not a 36-hour call. The first 24 hours you are on-call, and the next twelve hours you are working with stress-ECGs and doing ward work. I suppose part of the reason I didn’t make a noise about it was because I felt the need to know what all the hullabaloo was about. I’ve never worked more than thirty hours and I wanted to see if I could do it – because I know that next year there might be times that it is expected of me.

I left my room before sunrise to walk to hospital with my backpack and my sleeping bag. Students on Cardiology have an on-call room that is decent, but it doesn’t really have warm bedding. My bag was quite heavy because I had warm clothes, a clean change of clothes, food and toiletries with me.

I started the day with ward work – there was SO MUCH! So many patients needed new IV access specifically on the left arm, because when they go for coronary angiography the physician catheterises from the right. I got much better at doing IVs that morning. Luckily these patients mostly had great veins, as opposed to the patients from the awful Vascular Week where everyone had fried veins.

After this I saw some of the registrar’s new patients. There was a lot of waiting around because her day was off to a bad start and she was constantly being interrupted with new referrals.

By midday I slipped out. I had realised that I did not have enough food, so I went to my room to make a massive tuna sandwich.

I had been mostly on my feet so I was quite relieved that we had an afternoon academic meeting which allowed me to switch off for an hour. After that we had an ECG tutorial, which meant I could rest my feet but not my brain. I started getting reeeeally sleepy during this tutorial. It was about 18h00. Afterwards I ate my Chocolate ProNutro Energy Bar. Sidebar: I love these things. I tried the banana one a few years ago and it was awful. But the chocolate one is really good. And it really did give me a boost.

I had to see an acute admission quickly before ward round. When I presented the patient on ward round, it didn’t go so well. It was my first day on the rotation but the doctor really pulled the punches. I felt kind of miserable, and I had only just finished the first twelve hours. Twenty-four more to go.

The night was a little insane after that. We were running around the hospital seeing ward referrals and admitting elective patients for the week’s lists. In between we had our acute admissions, and our patients in the cardiology unit who tended to develop fevers late at night. Somewhere in between all this I munched an orange and a banana.

At 01h00 the doctor told me to have a nap. She didn’t have to tell me twice. I jumped into the on-call bed and my feet were killing me. But I was just too awake. I tossed and turned and mentally kicked myself for not bringing my headphones along so I could listen to an audiobook. I also realised I hadn’t brought my phone charger. But at this point my battery was on 60% so I was not worried.

Just as I thought I was going to fall asleep, the phone rang. The nurse was worried about a patient with symptoms of a DVT. So I checked her out and didn’t think she had a DVT, but… I’m just a student. What if I said she’s fine and something happened? I just couldn’t take that risk. Though I probably should have. So I called the doctor (who was also having a nap). She agreed that the patient was fine. Oops. But she didn’t really seem annoyed – or at least, not more annoyed with me than she had been earlier 😛

For the next few hours I kept being called just as I was falling asleep. A few fevers, for which I did blood cultures and DIDN’T wake the doctor, and then a few IVs that needed replacing.

I was too sleepy at the time to realise it, but the nurses really could have just let me sleep a bit and do all of the IVs at one time later that morning. None of them were on continuous infusions – they were all hep-locks for the patients’ procedures the next day. So they really weren’t urgent. I kind of got the idea that they felt if they were awake, then I should be too… but hallo, ladies, I’m pulling a 36 here!

Eventually I got about two hours of sleep. I managed to fall asleep by eating a chocolate bar and then doing some progressive relaxation exercises. I could have slept more but the kitchen staff came in at 05h30 and made a big noise with their food trolleys. So I woke up and got ready. The on-call shower was pretty awful. There was dust everywhere. I ate an orange and a yogurt and realised my food was finished. (If you think you have enough food for your call… you probably don’t.) Twelve hours to go.

The rest of the day is a bit of a blur. I know I ran to the hospital cafeteria at some point to get some more food. I know I took a thirty-minute nap before the patients for stress-ECGs began to arrive. Stress-ECGs were kind of interesting. I know I attended a few tuts and gave a few really stupid answers (at one point I suggested a stress-ECG for a hypothetical patient with acute coronary syndrome – as if I had not just spent the day learning about contraindications!)

I know that I kind of stumbled through the evening ward round.

I realised just how out of it I was when I started feeling really trippy while reviewing a patient’s echo and doppler flows. Guys. It’s so… fascinating. *googly eyes*

Anyway, the thing I haven’t mentioned is that during the 36 hours I got these periods of feeling “high” – like I could do anything. Like, “This is not so bad, wow, it feels kind of good!” It’s weird. A bit of a dangerous feeling I think. And I can see how people could get almost addicted to that kind of feeling. But the overwhelming feeling was exhaustion, so there’s that. I know that realistically I will have more than a few 36-hour stints during my internship next year. And I know now that I can survive it. But I also know that it was very hard, and that these shifts should not be commonplace.

After I finally left at 19h00, I showered until the water ran cold. I stuffed my face with chocolate. And I tried to sleep. But I was too awake now. Overstimulated. My brain had one thought only: FOOOOOOOD.