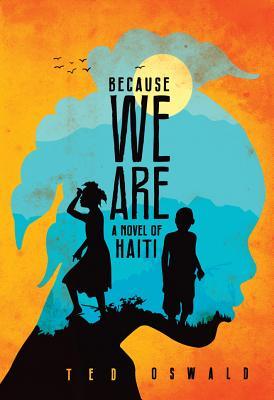 Ten-year-old orphan Libète has been hardened by the daily struggle to survive in Cité Soleil, Haiti’s most infamous slum. But when she and her best friend, Jak, discover a young mother and her baby brutally murdered in a nearby marsh, it’s unlike anything she’s encountered before. Though initially shocked, the adults of Cité Soleil move on quickly from the event; after all, death is commonplace in this community. Undaunted, Libète takes action with Jak in tow, plunging herself into a dangerous, far-reaching plot that will change her irrevocably and threaten everything she holds dear.

It seems I’m on a streak of reading thrillers that don’t entirely conform to the genre – although my ‘fraidy pantsness is not exactly complaining.

My favourite part of this book is Ted Oswald’s writing style. It is lyrical, lilting, and beautifully descriptive. I have never visited Haiti, but I felt immersed in the beauty and the filth, her suffering and her joy.

The girl turned around, and the strap of her light-fitting, sky-blue dress slipped. These were hardly the clothes to scavenge for beer bottles and soda cans. The boy was better outfitted for the task: shirtless (typical of young boys) and shoeless (typical of poor boys). His denim shorts, cinched with a cord around the waist, reached down past his knees.

There was something about Jak and Libete (isn’t that a lovely name?) that grabbed hold of me. I suppose it is the fact that Libete was the product of a real young Haitian girl Oswald met. They seemed tangible and loved, as if the author nurtured them.

Contributing to the grit of the novel is the appearance of Haitian proverbs at the beginning of chapters.

Still, I have to admit that I read this a bit slowly. For one, it is hard to read such suffering. It is not a tear jerker, and Oswald doesn’t extort the Haitian suffering for his creative purposes, but the harshness is still central to the story. I guess I would have liked it if there were a few more bright and happy moments, less of a suffering narrative if you will. But maybe that was not the story that needed to be told.

The novel has frequent flashbacks and I wasn’t always sure that they were appropriate. Sometimes I wondered that they detracted from the story and that a more chronological plot might have been preferable. At any rate, it did make the story harder to predict.

There were some other little things, such as Libete seeming almost unrealistically precocious, almost TOO MUCH, but ultimately this is a work of fiction based on fact. I really appreciated learning to know more of Haiti through this book. I first learned of the country while studying history of the slave trade, and it then caught my eye again after the 2010 earthquake. I have read Mountains Beyond Mountains by Tracy Kidder (about Paul Farmer) and Krik? Krak! by Edwidge Danticat (short stories about Haiti) and I feel like this is a perfect addition to literature about Haiti.

P.S: this is a non-profit novel that started as a kickstarter. Visit the webpage here, or watch the video below!

I received an eARC via NetGalley and Thomas & Mercer. This has not biased my review.