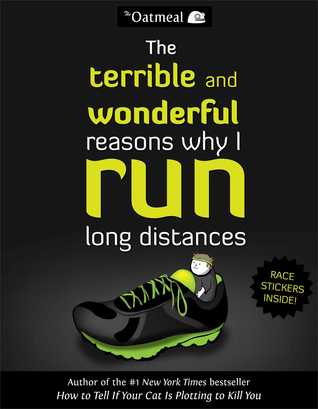 I’m a big fan of Matthew Inman (The Oatmeal) – I mean, the guy has a cartoon about the correct use of apostrophes, thank you very much! So I was very excited to review  The Terrible and Wonderful Reasons Why I Run Long Distances, but I can’t explain that without explaining my own running journey.

I was never the kid who ran in school. At athletics days I always came last in my heats and although I had a suspicion that I would do well in long distance, I never got coaching for it, so I never even considered being “one of those” people that do running. I equated runners with super-fit, super-healthy, and super-attractive super-humans who, in addition, actually had time to do something like running.

I started running in May of last year. Somehow, despite using my feet as primary mode of transportation in the various Semester at Sea countries, plus feeling like I hardly ever ate enough, I had gained a LOT of weight and become incredibly unfit. As a student, I cannot afford a gym subscription, I can not afford yoga mats and dumbbells, and I definitely cannot afford membership to a karate dojo. But I do own running shoes (well, more like all-purpose trainers that I use for hiking, but it’s all the same when you’re huffing along at snail’s pace).

So I started running. And I hated it. My campus is in the middle of industria (a.k.a. unsafe) so I initially ran in circles around the rugby field. I’ve never felt quite so much like a hamster on a wheel. But later I started doing ParkRuns, and sometimes I managed to convince myself that the lactic acid coursing through my blood was somewhat enjoyable.

And this is where The Oatmeal comes in with his running cartoons. For the longest time I felt like I didn’t belong in the running world, because I was not passionate about running, I sometimes cried while I ran, and I would much rather eat Nutella for dinner than a healthy balanced meal.

Turns out, I’m not alone. Inman explains perfectly the hate-love-hate relationship with running, and the realisation that sometimes, one does it simply for the fact that you feel better afterwards… and if not, at least you can stuff your face with Nutella instead of guilt. Something like that, eh?

As always, Inman is unapologetic with a hint of salaciousness. In other words: you just can’t put it down.

Every running stereotype is dismantled and after his gorgeous drawing and sharp wit I know I will be going for my first run in six weeks, and preparing for that half-marathon after all.

I love the appearance of The Blerch. The Blerch personifies all my triumphs and downfalls in running, and I am certain for many other runners as well. And if you loved Inman’s comics about the Red Velvet Mite and the Mantis Shrimp (read them if you haven’t) you will LOVE learning about Japanese bees in this book. It is prime dinner-time material, and I have been regaling every dinner companion with it since reading it.

In short: as a cash-strapped student, I rarely purchase books. And when I do purchase a book, it is rarely one that I have already read. But I will be buying this, when it arrives in South Africa – I enjoyed it that much. [And I need those running stickers!]

I received an eARC of this book via NetGalley and Andrews McMeel Publishing. This has not biased my review.