Before I left high school, I compiled a book with letters and notes from friends and teachers. I still own this book, and it has served its job in reminiscing and inspiration many times. But one thing that still guts me a little is that so many messages from teachers proclaim, “You are going to LOVE university!” and well… it just wasn’t as awesome as they promised it would be.

Of course, I don’t BLAME them. How were they to know?

For the longest time, I blamed myself. I felt so guilty. I had the opportunity that only 7% of people around the world have – to get a tertiary education – and a much smaller proportion of Africans and South Africans. My parents were busting their asses (sorry Mom and Dad – it’s the best way I can put it) to support my education and to help me with my loans. My teachers and played a massive role in preparing me for university – and I truly was WELL prepared.

I should be making the best of it, I told myself. I should be having all the fun so many young people don’t get to have, and be excited for every class, and stretch my abilities and wallow in every wonderful minute of it, as one teacher aptly put it. Not just because I owe it to myself, but to the parents and teachers who put so much into my growth up to that point.

And yet… I could not.

I had thought that university would be an intellectual crawling-ground. I expected highly analytical conversations and open-minded debates and yes, STRETCHING OF MY ABILITIES, and somehow… it was sub-par. It failed to live up to my expectations. Maybe my expectations were too high, coming from what I can only describe as a supreme high school experience that would be pretty hard to beat.

It took a while, but I finally learned that I was not alone. I was not some kind of design-flaw, or some horribly selfish individual who looked a gift horse in the mouth. There were others like me. On my campus, and around the world. Here’s a PostSecret collage with just a few examples. 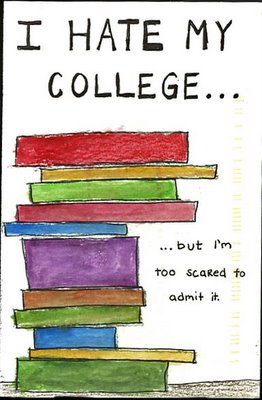 I’ve been avoiding writing this because I know it comes off as extremely negative initially, and I know that a lot of high school students read my blog. I don’t want to scare anybody, but I think it’s time that we stop perpetuating the lie that everybody loves college, because it isolates those who don’t – and those who don’t are more numerous than you could guess.

For the astronomical tuition fees I pay, I believe that I should have the right to have high expectations of my university, and I expect all universities to build their missions and visions around the expectations of their students, and not some highfalutin hogwash that looks good on paper. Unfortunately I think we are in an age where tertiary education around the world is pretty preoccupied with their business model and PR and not preoccupied enough with the wellness of their actual students. It is a generalisation, but not one without foundation.

So my solution (which I have slowly but surely been succeeding at) has been two-fold: first, I had to decide what it was that I wanted from my college-experience (because when it’s non-specific it’s very hard to tell WHY you’re unhappy) and secondly I forced myself to recognise that I could get those things from places other than college, and in ways other than the expected.

So, I had hoped for intellectual conversation, but what did that mean? I am on a medical campus, so I surely was not in a barren wasteland of IQ. But what I wanted was people who could talk about politics and education and public health and space and dragons! Could I get those at university? Partially. By getting involved in student media and later student government, I finally met some like-minded diverse individuals. I started attending events organised by other parts of campus, and I felt enriched.

I also started reading again, and read books that challenged me in weak fields. I researched online. I started random conversations with some of the nicer professors. I started dating a mathematician and for the first time felt a little stupid – and challenged.

I had wanted to broaden my own life experiences, so I looked at ways to travel (and I have travelled on three separate occasions, once around the world on a ship). I looked at doing things that I had rarely done – such as running! I did extra classes at the paramedic college when I was still a first year and not allowed to see patients in hospital yet.

The thing is, when your only expectation of college is to get away from your hometown and to go to loads of parties, it’s pretty awesome and you won’t be let down. College is good at that stuff.

But when you have higher expectations – as is your right, methinks – then fulfilling those expectations are going to take some effort on your own part, and that in itself is part of the college experience, and the growing-up experience. If your goal is self-enrichment and exponential learning and increased life-experience, then the first hard lesson to learn is that it is not going to fall in your lap. You will need to leave your comfort zone. You will need to look for those opportunities. You may need to drive, or send a million emails, but you will find the opportunities if you know what you are looking for.

The second important lesson is not to let yourself become bitter. I was certainly embittered a few times. At one stage, I just wanted to leave university. But I didn’t know where to. I didn’t know what I wanted to do. And if there is one sure way of making a rocky start to college a sustained nightmare, it is to become bitter and miserable. It’s a vortex, but you can get out of it with a little effort.

Has college been the time of my life? HELL NO, and honestly: I can’t wait to get out of here. But the closer I get to the end, the more I realise that there are some things I will miss. I have learned so much here, and allow me a moment of pride in the progress I have made, and the way that I have made bad things work out for good.

Never feel guilty for not enjoying college. If you do not recognise it and admit it at least to yourself, you can never find a way to change it. At least half of it is a system error, and the other half is NOT a “you-error”, but a mind-set error. You have simply been taught to expect the wrong things, and that is easily fixed.