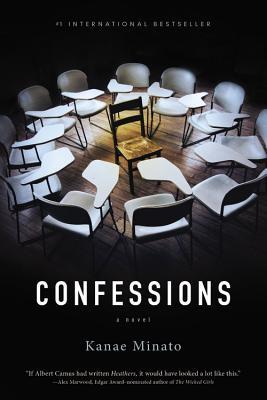 Her pupils killed her daughter. Now, she will have her revenge.

I have a lot of feelings about this book, so I apologise in advance for a rambling review. The first feeling is one of regret: not that I regret reading it, not at ALL; but regret that I did not love it as much as I had intended.

The other feelings are harder to name, so let me start off with some pointers: I love reading books set in different countries. I love learning about different cultures through books, although I am aware that books may offer only one viewpoint or exaggerated ones.

Last year, I spent a short while in Japan, which I loved. I enjoyed the people a lot and never really experienced it as a dark or violent country at all. I suppose that was one of the things that was difficult for me, namely trying to merge what I had experienced of Japan and what this novel was showing me.

Minato is Japanese, so I would never try to suggest that she is not portraying the real Japan: it is simply a Japan I don’t know.

I was not fond of the language used in the novel, although I can see stylistically why it was chosen. I wondered if it may be a translation issue, but again I know that Japanese is everything but a plain language, so I suspect that the dull and removed writing style was chosen to contribute to the tension.

Before reading this book, I had some limited experience with Japanese literature. I had read 1Q84 by Haruki Murakami, which I sorely disliked. I had tried to read Battle Royale but it had proven to be just too much for me (I do still blanch at a few things, it seems). I had also read a few Manga, which I mostly enjoyed.

What I have learned so far is that for a society so well-behaved, Japanese literature is anything BUT. It is both shocking and incredible. If it can be imagined by the mind, it can be written, and society would much quicker eat it up than condemn it.

I was uncomfortable with the use of HIV as a central point in the plot, because a lot of misconceptions are used and never corrected. I’m certain that was done purposefully as well, but it made me uneasy. I know that Japan has a pretty good HIV-education program though.

Lastly, these characters are AWFUL! Not poorly crafted characters, oh no: Minato is a master character-builder, but they were not very nice (again: probably purposefully). If you want a book where you feel emotionally attached to at least one of the characters this probably isn’t for you.

Confessions is labelled J-horror, but it’s not really scary per se… but it certainly is horrific. It is actually also a fascinating sociological painting. I would really like to discuss the novel with people who have lived or still live in Japan, as I think they could help me understand things a lot more.

Ultimately, I can see why this is such a popular book and I think it is a pretty good piece of work; unfortunately I just didn’t really like it very much.

I received an eARC of this book via NetGalley and the publisher, Mulholland Books. This has not biased my review.