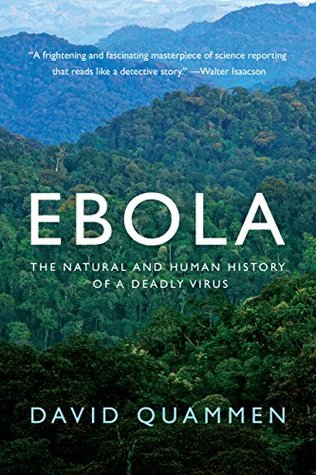 I read Ebola: The Natural and Human History of a Deadly Virus by David Quammen. There is hardly a more current book on the matter and I am getting so many questions from friends and family that I figured I might as well inform myself a little more.

In 1976 a deadly virus emerged from the Congo forest. As swiftly as it came, it disappeared, leaving no trace. Over the four decades since, Ebola has emerged sporadically, each time to devastating effect. It can kill up to 90 percent of its victims. In between these outbreaks, it is untraceable, hiding deep in the jungle. The search is on to find Ebola’s elusive host animal. And until we find it, Ebola will continue to strike.

If you’ve been keeping up to date with the literature (or you’re a student or professional in any of the medical sciences) you might not learn too much that you did not already know.

“The current scientific understanding of ebolaviruses constitutes pinpricks of lights against a dark background.”

I felt like the book was basically rehashing a lot of what we already know about Ebola, epidemiology and some other viral haemorrhagic fevers. Which is not entirely obsolete because Quammen certainly has a way of making medical literature interesting in readable.

I do think that it will be a tough, albeit doable, read for the non-scientific layperson as there is still a bit of jargon. It’s certainly not a self-help book and as such you do need a bit of a baseline interest to make it through the pages (it is not very long).

Some interesting things I did learn include that bats are NOT the confirmed natural reservoir for Ebola as no live Ebola virus has yet been cultured from bats. Gorillas and other apes die en masse from Ebola, but they are not the natural reservoir either.

Quammen explains how the virus works, which is fascinating; and also elaborates on the socio-political climate of the virus over the years.

“What we should realise […] is that the events in West Africa […] tell us not just about the ugly facts of Ebola’s transmissibility and lethality; they tell us also about the ugly facts of poverty, inadequate health care, political dysfunction, and desperation […], and of neglectful disregard of those circumstances over time by the international community.”

From a historical point of view I enjoyed reading about the timeline of outbreaks, and the various people that have contracted it through their work and their individual disease courses.

It made me aware of one thing: we don’t have this thing under control and maybe authorities would do well to stop pretending that they do. We don’t even know for sure what the natural reservoir of the virus is. There aren’t enough people studying the virus because they are afraid of it, as they should be. We don’t know why this outbreak is so much worse than previous outbreaks. We don’t know why healthcare workers who have been following all the protocols, like Nina Pham, still managed to contract the disease.

Just a week or two ago, people were trying to calm first-world citizens down with quips like, “We have gloves! We have autoclaves! Ebola won’t last long here!” Well lookit. It’s not enough. People are allowed to slip through quarantines and travel restrictions because somehow we still haven’t grasped the fact that viruses don’t care too much for borders when it comes to our interconnected globe.

I know we are trying to get people not to panic, but a bit of caution never hurt anybody. If the book taught me anything, it’s that policy makers are going to need to step up to the plate for this one.

Disclaimer: I received an eARC of this book via NetGalley and Random House UK in exchange for an honest review.