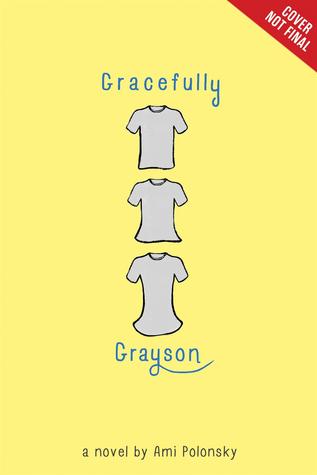 Grayson is a sensitive kid, orphaned as a baby and living with his aunt, uncle and their two children. Grayson is an artist. He loves thrift stores. He experiences his world vividly. He has undiscovered talents. He is kind.

But he is not who he is. Grayson is not a little boy, even though he was born one and is known as one.

I adored Gracefully Grayson by Ami Polonsky (you should check out her blog). This book is so gently told that one’s love for Grayson just swells. I want to give her a hug and make everything better.

A few weeks ago, Stacey Ann Chin tweeted this:

Wonder when Disney/Pixar/The Man will do a kid flick about a character who is gay? #NoTimeSoon

Well, it’s not a movie, but Disney-Hyperion did well with this book. It is middle-grade and a quick and easy read. The dialogue is genuine and the characters are tangible. Just a group of regular people, navigating their way through some challenges, one that happens to be the issue of transgender children.

This is NOT a political book. This is a story that is readable by all kids, and even teenagers and parents. It is not complicated. It is not a debate. In fact, at its core is a young child getting to know himself, and not a political battle. No mention is made of the idea of a sex-change, because twelve-year old Grayson is not thinking about that. No. Grayson is thinking about beautiful dresses, and the princess she wants to be. She is lonely, and dreams about having a friend to shop and giggle with… just like any other girl her age. I really appreciated that point-of-view.

I also thought that they bullying aspect was done well. It was hard to read about Grayson being bullied, and about her guardians not always standing up for her as they should, but it was also good to see that there were people who supported her and befriended her. People who were wonderful and accepting and really the kind of people I hope my kids will one day be and/or befriend.

The Greek Mythology included in the book was so fitting and I enjoyed it, although my own knowledge of mythology is lacking.

I have been trying to think back to when I first learned about transgender individuals. I don’t know how old I was. I wonder if the learning experience was positive or negative? I wonder if whoever told me about it did so with love and not ridicule. But I can’t remember, and I so hope that children would be taught about gender differences in a spirit of acceptance. I do think that books like these can lead the way.

“White and black. Light and dark. And me, in the middle of it all. Gray. There’s nothing else for me to do but walk through these column of dark and light, so I do.”

Simply put, Gracefully Grayson is a gentle little book the tiptoes into your heart, and there it stays. Read it!

I received and eARC of this book via NetGalley and Disney Hyperion. This has not biased my review.