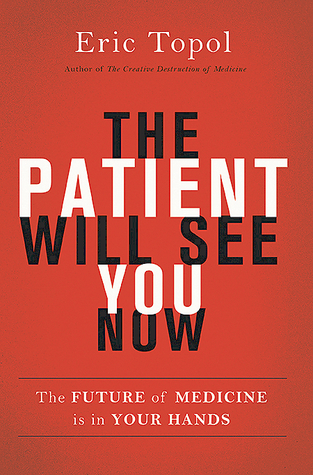 The Patient Will See You Now: The Future of Medicine is in Your Hands by Eric Topol

What I thought this book would be about:

Doctors are too paternalistic, patients know better than doctors, FREEDOM TO THE PEOPLE YO, doctors are obsolete, welcome our overlords the computers who will heal you now.

What this book was about:

The inevitable changes in medical science that give us the choice: adapt or die. (Spoiler alert: adaptation is usually the preferable option.) Awesome technology! Awesome ethical discussions! Incredible advancements! Medicine is NOT stagnant! Awesome peer-reviewed research!

To be honest, when I requested this book I saw one sentence, “Computers will replace physicians in many tasks” and my vision went red. So my intention was kind of to read it and rip it to shreds.

Spoiler alert: I’m not going to rip it to shreds.

Author Eric Topol is apparently a big-shot cardiologist in the USA. One thing I noticed during my cardiology rotation was this: cardiologists seem to be early adopters. They like new technology and are quite receptive of its benefits.

The Patient Will See You Now is essentially a massive meta-analysis of digitalisation and the subsequent democratisation of medicine. Every chapter is prefaced by apt quotes from others in the field, and Topol references some absolutely incredible academic papers. Essentially you’re not just reading a book, you’re reading a conglomerate of the best publications and scientists on the topic. (He also references House, M.D., so that is cool.)

“Once the digitisation of medicine got legs, it became increasingly clear that democratisation would be the next step.”

Topol calls the smartphone medicine’s Gutenberg Moment – put simply, that it promises to do for medicine and health what the Gutenberg Press did for humanity. This in itself is a fascinating analysis.

Topol also address important current matters of healthcare: such as the fact that many patients are not granted access to their own medical notes, one of the biggest paternalistic faux pas which persists in “modern” medicine. He presents peer-reviewed evidence which proves that knowing one’s own health details is not potentially dangerous to the patient, contrary to the belief of many physicians.

The first chapter definitely riles the reader up a little. I highlighted like a mad thing and made angry notes like, “YOU STILL HAVEN’T PROVEN THAT THIS IS A GOOD THING!” – but, Topol does eventually set about proving his claims.

That is the best thing about this book: it is not one of those hoi polloi books that claims that physicians all have evil intentions and that patients must take over. He takes a while to get there, but Topol acknowledges the value of the physician and actually impresses how technology can change our practice for the better.

At least in my set-up, where South African doctors are under-staffed and over-worked, giving allied health professionals and patients the ability to handle a lot of what is traditionally our job, this makes sense.

But he does not only impress how this will help doctors and patients, but how it can improve healthcare on a large scale.

All this by utilising the technology that is at our fingertips – and emerging from the 18th century, finally. Ultrasound stethoscopes, nanochips, blood panels performed on single drops of bloods: it is a Wonderland we don’t realise we exist within.

Topol obviously has a bias, but he does a good job of presenting counterarguments to his own beliefs, and readily admits where more development is necessary. It makes the book realistic and worthy of acclaim.

I would hate to give too much of its awesomeness away, but I will probably have a few follow-up posts about things in this book. I highly recommend that doctors and other role-players in healthcare read this book. I don’t think that junior medical students would necessarily find a lot of worth in it, but anybody with an interest in healthcare and technology could find this a gripping read.

If you read this book: drop me a line. I’m dying to discuss it more!

Some things that you should totally read if this book sounds interesting: