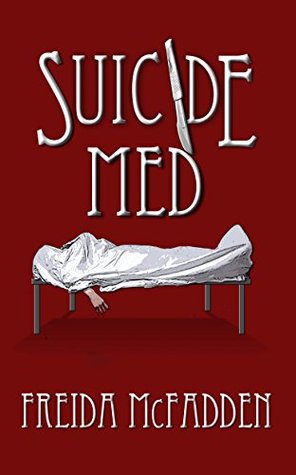 I read a lot of medical fiction. I even have some lists about them (fiction and non-fiction, actually). I think I just read one of my favourites: Suicide Med by Freida McFadden, aka Fizzy McFizz. She also wrote The Devil Wears Scrubs, which I reviewed here.

In all honesty, I don’t think the blurb does it justice:

There’s a reason Southside Medical School has been nicknamed “Suicide Med.” For the last six years, every year one student has taken his own life. Except for last year. Last year was a murder-suicide.

The press has pointed to the heavy workload as the culprit in the high suicide rate. Some students believe that the school is cursed. And others believe that the deaths may not be suicides at all—that it’s no coincidence that Dr. Conlon, Southside’s quirky but beloved anatomy professor, joined the staff on the very year that the suicides began.

Either way, the same question echoes through the minds of every first year student at Suicide Med: Who will be next to die?

I don’t know how I’d improve it, but I just probably wouldn’t read the book based on the blurb alone (but the cover helps!). I read it because I knew McFadden to be a fun author. And also it was free on Amazon for a day, which was cool because I still haven’t figured out the buying-overseas-thing.

Suicide Med follows a bunch of kids during their first year of med school. It’s different from most med school narratives in that it actually has a plot, whereas many other med school books just kind of follow the daily struggles of a med student. Which is cool, but it gets a little repetitive. And boring. And stuff.

It’s a psychological thriller, which you don’t often see in med school books. I loved it. I’m a big wuss, so I appreciated that it didn’t make me sleep with the nightlight on, but it did give me a little adrenaline spike. 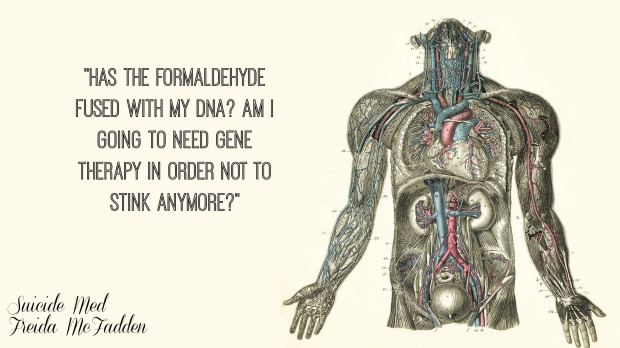 One reviewer complained about the characters all being stereotyped. I suppose, in a way, they do roughly adhere to some stereotypes; but I liked it because THEY WEREN’T ALL THE SAME BORING MED STUDENT STEREOTYPES. Guess what? In my med school class we had girls obsessed with boyfriends and friendly guys and gunners and “legacies” and very few people fit the typical med school stereotype, which is one stereotype Suicide Med really avoids.

I read Suicide Med in one day, while I was post-call (which says a lot, because I LOVE sleeping post-call). I actually couldn’t put it down. I would rate it higher than a lot of the other big thrillers on the market, and I’d highly recommend it to anyone looking for a fun but gripping read.

This is not a “lesson” story with a happily ever after – although I can imagine that some readers might be unhappy that the epilogue is “too tidy”. Honestly, it left me wanting a sequel! But actually, rather not. I think the tension at the end is perfect.