If you’ve spent any amount of time on the internet, you will have seen this image (alongside) about Jonas Salk refusing to patent his Polio vaccine. For the longest time that was one of the only real thing I knew about Jonas Salk – that, and the column of differences between the “Salk” and “Sabine” vaccines that we had to study during MS1.

In Charlotte DeCroes Jacobs’ complete biography of Jonas Salk, she exposes more than this uni-dimensional view of the man who made one of the twentieth century’s most important contributions to healthcare.

In 576 pages, she delves into his family tree, his childhood and education, and his journey through science and research. But those pages took me exactly a month and a half to plow through – and I wouldn’t exactly describe myself as a slow reader.

I noted early on that the book read “slowly”. In truth, it’s hard to assess this observation in isolation because the book did not only make me think about Salk, but also about biographies. 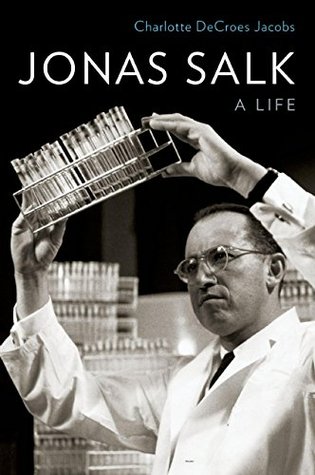 Here’s what happened as I progressed through the pages: I lost some of my affection for the idolised scientist. I couldn’t – and still cannot – decide if that is a good thing.

Are biographies supposed to build up the heroes in our eyes? Or reveal them as the flawed humans they are? Or, are they supposed to give us the facts and nothing else? (If that’s the case, then some of my favourite biographies are interminably flawed.) Nobody wants to read a biased biography, but there were times that I felt as though the author was another intellectual who would never give Salk the acceptance he craved.

These things became apparent: Jonas Salk was brilliant. He worked hard. He was compassionate. He responded to fanmail. He was weighed down by the world’s problems.

And yet, despite Jacobs illuminating all these things, Salk did not truly feel humanised in this biography. It seemed that around every turn was some shortcoming that overshadowed his successes. No wonder he felt like this when alive, too.

I wished that more time was spent on Salk’s younger years. I wanted to know his favourite books, activities – but then, I guess the biographer must work with the material she has available.

There were several sections that I felt were unnecessary. I don’t really want to know the content of long letters and conversations when they are not pertinent to the topic. Perhaps they are historically important; but in the same breath, when I read a biography I hope to read more than something I could read by myself in an archive.

My biggest gripe was the constant recollection of Salk’s exclusions from the scientific world. We get it! He craved acceptance from his peers in academia and he didn’t get it and it sucked. But it really sucked the joy out of reading to hear it every. single. page. (Or close to that. Every chapter, maybe.)

Again, I cannot guarantee that this was a phenomenon that arose in isolation. There may have been some projection involved. It is kind of terrifying and depressing to hear that this great genius and kind man to boot, was viewed with disdain. What hope is there for socially-awkward me? We have many of the same ideas about social responsibility and the fact that HE was scorned for those beliefs scares ME.

The (somewhat rushed) conclusion seemed an attempt at ending on a high note, but it was too little too late. I finished the book feeling sorry for Jonas Salk, and perhaps a little annoyed. Not really inspired (although that, one might argue, is not the purpose of a biography).

It was fascinating, really. Jonas Salk, A Life made me think that there may be truth in the belief that one should step down at your peak. Nearly none of Salk’s post-Polio vaccine endeavours were successful. Perhaps he should have accepted his success and spent the rest of his days paying attention to his family, instead.

You see! This is what makes reviewing a biography difficult! Am I supposed to review the subject, too?! And all of the crazy thoughts that the subject makes me think as well?!

I had a real problem with the fact that ethics weren’t really addressed in this biography. As the author correctly notes, much of Salk’s work took place in the years before Internal Review Boards and Ethical Approvals, but I did feel that it was worth addressing nonetheless. Salk had great compassion for the disabled children upon whom he tested the first batches of vaccination, but the ethics thereof should still have been discussed. What is history if not to learn from it?

Similarly, there was a lot of use of terms such as “Mongolism” and “retardation” – which really aren’t terms we should use anymore. I understand that the terms were used THEN, but in many of these cases they weren’t quotes, they were used by the author herself. Although not a major part of the book, it irked me.

That said, I gave this biography three stars because I think it definitely fulfilled its role. It was well-researched, it was comprehensive, it used multiple sources, and it was relevant. It lost points for me in the writing style, which was not gripping; and a certain aloofness that may or may not have been intended.

I won’t be recommending this to hopeful medical students or biomedical researchers just yet. I think if read to early, it could be fairly demotivating to a young hopeful. In my case, I’ve experienced enough that the book did not jade me, and I was able to take the good from Salk’s life.

If the man Jonas Salk or the world of vaccines is of interest to you, I would suggest this biography. I may just also suggest reading it in snippets along with another, lighter book, so as not to wallow in despair.

Disclaimer: I received an eARC of this book via the publisher and NetGalley in exchange for an honest review.