I SAW MADONNA IN CONCERT AND IT WAS AMAZING.

I feel like that one sentence may be the best I can do to describe the experience.

It was my first ever concert, whereas The Boy’s sister (my travel companion) is a musical genius who has attended many, many concerts in her lifetime. Admittedly, I only really became a Madonna fan two years ago, whereas she has been a queen of fans for thirty-odd years.

Never mind: we both has a fantastic time.

After gallivanting around New York City during the day (and meeting up with Jackie from Youth Journalism International!) we were quite late for the show. But so was Madge (and even opening-act Amy Schumer), so all was alright.

Boy’s Sister wore a replica dress of the Sticky & Sweet tour and ALL the die-hard fans recognized it, so that was awesome. I suppose the worst part was the $5-odd we had to pay PER BOTTLE OF WATER.

As for the show… THE SHOW, YOU GUYS. I was a fan before. Now I’m a freaking GROUPIE. It was not simply a music show. It was a feat of stunts and choreography and costume design and lighting and sound and and and… 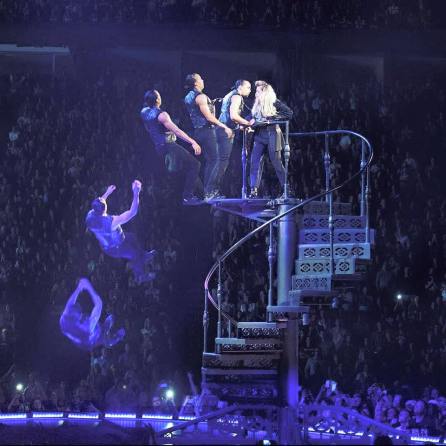 Madge has a fantastic stage personally, and her dancers/stuntmen and women are top-notch. Four days later I am still on a high.

Now, if you need me, I’ll be on iTunes downloading all Madonna’s tracks of ever.