You know that saying about readers having many lives through the books they read? I love it, because there are so many things I can’t do, but would love to. Then there are some things books have inspired me to do… or at least to dream about.

I’m linking up with Top Ten Tuesdays to bring you (some of the) things book have made me want to do.

A la Malory Towers by Enid Blyton, Spud by John van de Ruit, Looking for Alaska by John Green and even Harry Potter, to name but a few.

My grandparents attended boarding school from a very young age and always impressed on me how lucky I was to live at home. They were definitely right, but I still sort of wished I could go to a boarding school. It looked like a lot of fun (and pranks)! I tried pretty hard to get sent to a girls’ boarding school for high school, but there was a perfectly good girls’ school in my hometown at more affordable rates so that was a no-go.

A la Famous Five/Secret Seven by Enid Blyton, the Swart Kat series by Chris Sasner, Lumikki Andersson by Sala Simmuka, and more. (Surprisingly, Nancy Drew did not form a big part of my girlhood reading.)

I actually seriously considered being a PI as a career option for a long time. My friends and I even snuck out of the house in the middle of night while on holiday when we were little, hoping to find a mystery. Then we got scared and ran back home!

Inspired by any number of “Dear Diary” novels, but probably originally The Diary of a Young Girl by Anne Frank.

I might have shared previously that I read Anne Frank at a very very young age, so much so that I probably didn’t understand much of what was going on (I was seven years old). But it did inspire me to keep a diary. I’m still pretty bad at journaling regularly, although I consider it an important activity.

I loved the Animal Ark books by Lucy Daniels and wished there was an animal shelter where I could volunteer. In reality no animal shelters would accept a kid-volunteer, boo. But I became obsessed with rescuing neglected animals, dreaming about the “Animal Ark” I would set up one day. I went on to read many animal-themed books like It Shouldn’t Happen to a Vet by James Herriot. Veterinary Medicine remained a career option until very late into my schooling.

5. Be a Forensic Pathologist

The Temperance Brennan novels by Kathy Reichs really got me hooked on forensic pathology! I think back then I was more attracted to the idea of solving crimes and having adventures (see #2 above), although I realised early on that Forensic Pathologists don’t so much solve crimes as investigate a body and provide expert opinions (at least in South Africa). I still enjoyed my Forensic Path rotation in med school, but I quite prefer my patients alive.

P.S: I’m fully aware that Temperance was actually a forensic ANTHROpologist, but… eh.

6. Learn About Womanhood and the History of Feminism

Until high school, I don’t think I quite knew what feminism was, but my English teacher fixed that very quickly. I still didn’t have much of an opinion until I read books like The Vagina Monologues and Maverick: Extraordinary Women from South Africa’s Past by Lauren Beukes. I like to thing that reading widely also prevented me from tipping into the extreme.

I haven’t even really read that many road-trip novels (the one that comes to mind is Saving June by Hannah Harrington but I’m sure I’ve read others), but I still dream of executing the perfect road-trip. I have had a few mini road-trips but I want to have a good cross-country adventure at some point.

I was actually a music geek in high school but never took it any further. I still have a soft spot for novels with/about music. Books like Revolution by Jennifer Donnelly, and The Sky is Everywhere by Jandy Nelson (especially the latter because I used to play the clarinet too) make me want to pick up an instrument again.

I knew a little bit about Parkour, but after reading Everything, Everything by Nicola Yoon I started researching it and it looks so cool! I don’t really have the coordination or the time to perfect it though… and also probably the guts. But it looks awesome. 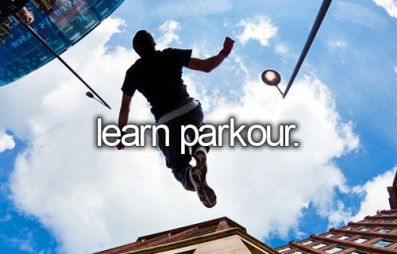 Admittedly I only read The Terrible and Wonderful Reasons Why I Run Long Distances (Oatmeal) and My Year of Running Dangerously (Tom Foreman) after I had started running, but reading their books was what made me decide to train up for a marathon, and ultimately for OMTOM.

Have you done or wanted to do any of these? What things have books made you want to do or learn about?