If you’ve been paying attention, working hours of doctors (especially junior doctors) have been getting some good airtime over the past few months. The Province of the Western Cape has committed to actively reducing maximum continuous working hours for doctors to twenty-four, the HPCSA has promised to “look into it” (not that we have too much confidence there), and our biggest representative, SAMA (South African Medical Association) has come out in our support.

One of the things to come from all this is the launching of an armband campaign. This has its origins, I believe, from a similar campaign in the UK – although I have not been able to find any source to this link. 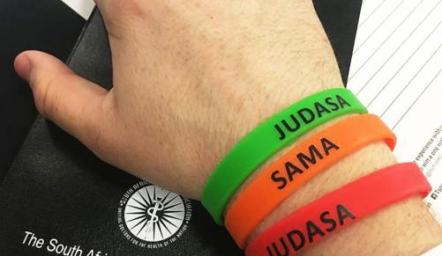 Junior doctors (all doctors?) are to wear colour-coded wristbands to indicate the amount hours they have worked during their shift. This is something I support because it raises awareness not only among our supervisors, but also our patients – who, as I’ve shared before, are appalled when they realise the extent of our hours.

My problem lies not with the campaign, but the structure of the colours.

Doctors who have worked anything up to 24 hours wear green, between 24 and 30 wear orange; and if a doctor has worked more than 30 consecutive hours during their shift, they wear a red wristband.

This means for all means and purposes, the backers of the campaign believe that working for 24 hours straight is “safe” – not only for the doctor, but the patients she treats.

Let us remember that peer-reviewed research has shown that being awake for 24 hours straight is comparable to being inebriated:

“…after 24 hours of sustained wakefulness cognitive psychomotor performance decreased to a level equivalent to the performance deficit observed at a blood alcohol concentration of roughly 0.10 %[double the South African legal driving limit] .”

So a doctor is too impaired to drive, but here, have a patient. Save this guy’s life, please; just try to walk in a straight line at the same time. Here is an orange wristband for your efforts; we all know that when drivers see an amber traffic light they take it very seriously and stop immediately (not).

By starting a red wristband at 30 hours, SAMA is implicitly agreeing with the 30-hour limit placed by the HPCSA. If they were serious about condemning 30-hour shifts, they would start the “red” zone at 24-hours of continuous service, and NOT at 30 hours.

With these constraints, the campaign does not bring about much change. It just gives us a false sense of being heard.

Do I think the campaign is a great idea? YES!

Do I support its category-guidelines? Heck no.