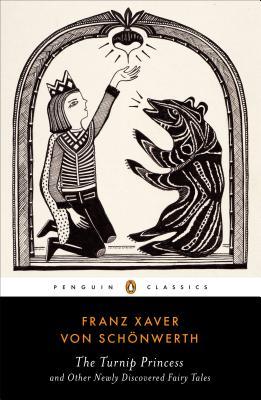 Most kids have a penchant for fairy tales, but as a kid, my favourites were the stories my dad made up for me. Legally-blind, he made up special characters just for me that far surpassed any Snow White. Of course I loved Disney, but I only really started appreciating the Grimm Brothers’ tales when I participated in a MOOC on Coursera called Fantasy and Science Fiction: The Human Mind, Our Modern World. (It’s still a hugely popular course, check it out here.)

When I saw The Turnip Princess on NetGalley I could not resist it. Franz Xavier von Schönwerth is described as a “contemporary of the Brothers Grimm” so that grabbed my attention immediately!

When reading fairytales as an adult one perhaps should not expect to be quite as transported as a child would be. That said, these tales are probably not as suitable for children to begin with.

Some of these tales are very familiar, and I remember cleaned-up versions of them being told to me as a child, such as The Traveling Animals. (Basically, a bunch of animals scare a bunch of robbers out of their house and live their days in their ill-begotten shelter.)

I still believe, as I did before, that fairytales tell us of an era. The morals we try to add to them are our own invention, perhaps because we don’t always relate to the era of their origin.

Schönwerth’s stories are a lot grimier. It is said – and noticeable – that he documented the stories as told. He didn’t prettify them. Many stories have similar threads, and the decision to include all those stories – instead of combining them – again points towards an anthropological viewpoint.

My biggest beef with this collection is the translation. I feel that for a collection from so long ago, terms such as “that ugly animal gave him the creeps” from Follow Me, Jodel is simply not appropriate. I want to read a translation that is true to its original audience, not adapted to the colloquialisms of the current day.

I did find myself skimming here and there, but had I more time, I would like to enjoy these stories more slowly, while researching more into the times and places with the help of the endnotes provided.

While Schönwerth’s collection will doubtfully reach the kind of acclaim that Household Tales did, it certainly has as much value in preserving histories and perceptions.