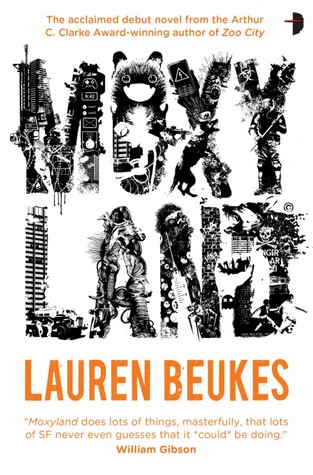 I don’t really know how to describe Moxyland. It is Science Fiction set in Cape Town, and has FOUR POVs – an art-school drop-out, and activist, an “Aidsbaby” climbing the corporate ladder and a Vlogger/Gamer (basically). Don’t run away from the multiple POVs though, I thought it was quite well done. One can clearly tell the difference between characters, unlike some other books (like The Scorpio Races) where it was easy to get confused between the narrators.

The South Africa in Moxyland is basically a police state that favours big corporations. Technology is everything, and your cellphone determines your level of access. Thus, the homeless without cell phones truly are entirely disenfranchised.

Don’t expect to be spoon-fed by this novel. It is written as if we already know this world, so the world-building happens as the story progresses. We are not given a beginning or an end, much like China Mieville’s Railsea. I like it that way: too many books spend too much time world-building and not enough time story-telling. It also means you have to stay awake and alert, or you’ll miss out.

There are hints of big things that have happened before: wars and prison camp situations similar to WWII, but it probably involved disease rather than religion, most likely HIV. Massive leaps have occurred in science and technology, including genetic engineering and virtual reality becoming more widely used. Companies are so involved in every aspect of daily life that they even control orphanages – and use it as a way of acquiring the brightest young ones to work for them.

Many times I found myself thinking, “This world is so cool, why do these people not like their world?” only to be ripped from my reverie and shown how things go wrong. This is the magic of Moxyland: Beukes lures you into thinking the way the citizens of the book think, and then shows you what a catastrophe it is.

The incredible thing about Moxyland is that it doesn’t seem unrealistic. Yes, it’s Sci-Fi, and futuristic, but it feels entirely real. That is probably because Beukes is a science nut and clearly researches her work.

By far one of my favourite SF books. See the trailer below for Moxyland in the author’s own words.