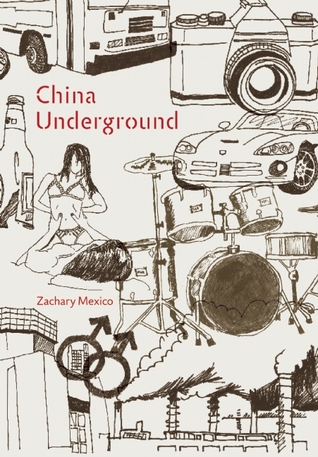 China Underground by Zachary Mexico was the third book I purchased on Semester at Sea. The book comprises a series of anecdotes of various Chinese citizens, whom the author met and interviewed while in China. These include sex workers, minority groups such as the Uighurs (a Chinese Muslim minority), art lovers, film makers, drug dealers (and users) and more. Their commonality is that they are outsiders, and that each sees their country and the world through a distinct lens.

The book is almost like a collection of short stories that can be picked up at any point and any time. There is something for everybody, although I would of course suggest reading the whole book.

Having been to China twice I am certainly not an expert, but I felt that the book painted a fairly accurate picture of country. That is not to say that the book did not miss anything, or that the book is ALL there is to China.

I enjoyed the variety of interviewees, because they illustrate just how diverse China is (as it should be, for its size). Mexico illustrates how unique his subjects are… but the reader also notices how similar they are to their Western counterparts. The West also has its disillusioned academics, its struggling artists, its addicted gamers, its young people thirsty for success.

However, I disliked a lot of the undercurrents in this book. Mexico has his own biases, and unfortunately they come across strongly in the stories. He likes to point out his subjects’ poor fashion sense and how they attempt (yet fail) to conform to Western fashion. In most stories, his fashion observations contribute nothing to the endpoint.

This is a trend he continues in general, often pointing out how China is failing at imitating the West – as if the West is the ultimate end-point; as if that is what China wishes to emulate. Mexico seems to be of the opinion that every subject must want to leave the Chinese way of life, and if they deny it then they are simply unaware of their subconscious desire.

But my biggest problem is that the author does not illustrate personal growth. It appears that his view on China never changed over the course of his interviews – and if you cannot grow and learn from such an experience, you should be asking yourself, “What is the point?”

This aside, I would strongly recommend this book to anybody who loves China, wants to go to China, or has been to China. Factually, Mexico is spot-on. He explains the intersection of culture, history and religion wonderfully, and provides an excellent insight into the country.

Also, it is a fun book. It reads quickly and easily, and really does transport your mind all the way to China.