Remember that episode in House, M.D. with the girl who can’t feel pain? I remember watching that and thinking, THIS CAN’T BE REAL. (Hey, I was just a little first year at the time.) Google showed me the light, though, and so I learned a pretty important physiological lesson: pain has purpose.

I love reading YA with protagonists that aren’t perfect. Give me protags with OCD, PTSD, porphyria, cerebral palsy, autism… I want to read about all of the people in the world! I was elated when I heard that someone had written a book about CIPA – congenital insensitivity to pain with anhidrosis. 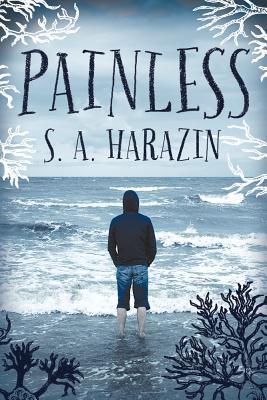 A first kiss. Falling in love. Going to prom. These are all normal things that most teenagers experience. Except for 17-year-old David Hart. His life is anything but normal and more difficult than most. Because of the disease that wracks his body, David is unable to feel pain. Abandoned by his parents, David now lives with his elderly grandmother who is dying. When David’s legal guardian tells him that he needs to move into an assisted living facility as he cannot live alone, David is determined to prove him wrong. He creates a bucket list, meets a girl with her own wish list, and then sets out to find his parents. All David wants to do is grow old, beat the odds, find love, travel the world, and see something spectacular. And he still wants to find his parents. While he still can.

Painless by S.A. Harazin is a deliciously easy read. No struggling to understand what is going on and no pseudo-philosophical chit-chat. The writing style reminded me of The Perks of Being a Wallflower in that the main character has a lot of thoughts and internal monologue. And also, he is quite socially inept.

Side-note: don’t you love the cover? I really like it. And it is relevant to the story!

I liked that David’s sole problem was not his CIPA. He is dealing with the decline of his grandmother’s health and mind, feelings of rejection by his parents, having a crush, fighting with friends and lying about having sex. David tries valiantly to prove his independence, and that is something with which readers will surely be able to identify.

My biggest gripe was with Luna. I did not like her and I didn’t like her “secret” – did everyone have to have medical issues? She was manipulative, and that shouldn’t be blamed on her secret.

Although I didn’t find this book to be life-changing, I enjoyed it and can comfortable recommend it to high school readers (and, you know, anybody else that likes YA).

“I’m not a baby, but sometimes I think I’m waiting to be born. The first time, God forgot the neurons.”

You don’t have to know anything about CIPA to enjoy this book, as the author pretty much tells you everything you need to know. However, there was some misinformation as to the rarity of CIPA. It’s rare, but not “seven people in the whole wide world” rare.

Here are some of my favourite CIPA articles, if you want to know more: